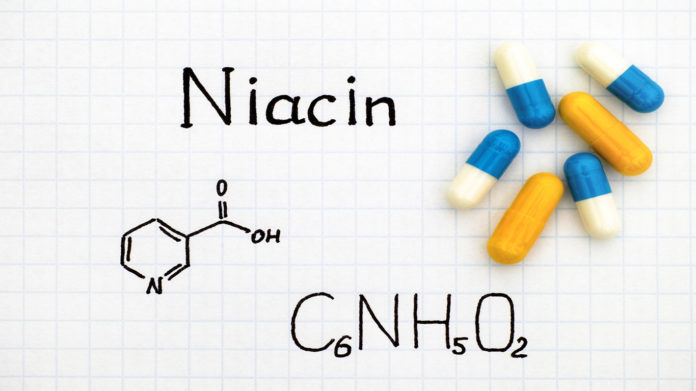 Niacin is a form of vitamin B3. It is found in foods such as yeast, meat, fish, milk, eggs, green vegetables, and cereal grains. Niacin is also produced in the body from tryptophan, which is found in protein-containing food. When taken as a supplement, niacin is often found in combination with other B vitamins.

Do not confuse niacin with niacinamide, inositol nicotinate, IP-6, or tryptophan. See the separate listings for these topics.

How Does It Work?

Niacin is absorbed by the body when dissolved in water and taken by mouth. It is converted to niacinamide if taken in amounts greater than what is needed by the body.

Niacin is required for the proper function of fats and sugars in the body and to maintain healthy cells. At high doses, niacin might help people with heart disease because of its beneficial effects on clotting. It may also improve levels of a particular type of fat called triglycerides in the blood.

Niacin deficiency can cause a condition called pellagra, which causes skin irritation, diarrhea, and dementia. Pellagra was common in the early twentieth century, but is less common now, since some foods containing flour are now fortified with niacin. Pellagra has been virtually eliminated in western culture.

People with poor diet, alcoholism, and some types of slow-growing tumors called carcinoid tumors might be at risk for niacin deficiency.

For people who need to lower low-density lipoprotein (LDL or “bad”) cholesterol, the prescription drug class called “statins” is used. Niacin might be used in people with high levels of both cholesterol AND blood fats called triglycerides. Niacin may be combined with other cholesterol-lowering drugs when diet and single-drug therapy is not enough. Niacin improves cholesterol levels but does not improve cardiovascular outcomes such as heart attacks and strokes.

Treatment and prevention of niacin deficiency, and certain conditions related to niacin deficiency such as pellagra. Niacin is approved by the U.S. Food and Drug Administration (FDA) for these uses. However, using niacinamide instead of niacin is sometimes preferred because niacinamide doesn’t cause “flushing” (redness, itching, and tingling), a side effect of niacin treatment.

Diarrhea from an infection called cholera. Taking niacin by mouth seems to control the loss of fluid due to cholera.

Niacin deficiency causes pellagra, a condition characterized by dermatitis, diarrhea, and dementia. Pellagra was common in the early twentieth century, but niacin-fortified foods have virtually eliminated this disease in the West. It can be seen in patients with poor diet, chronic alcoholism, carcinoid tumors that decrease endogenous niacin production, and Hartnup disease, an autosomal recessive disorder that interferes with tryptophan absorption.

Conditions that increase niacin requirements, such as hyperthyroidism, diabetes mellitus, liver cirrhosis, pregnancy, and lactation, can sometimes result in deficiency, but this is rare. Some researchers think that sleep deprivation-induced dermatitis might be caused by niacin depletion because of similarities between this condition and pellagra.

Are There Safety Concerns?

Niacin is LIKELY SAFE for most people when taken by mouth. A common minor side effect of niacin is a flushing reaction. This might cause burning, tingling, itching, and redness of the face, arms, and chest, as well as headaches. Starting with small doses of niacin and taking 325 mg of aspirin before each dose of niacin will help reduce the flushing reaction. Usually, this reaction goes away as the body gets used to the medication. Alcohol can make the flushing reaction worse. Avoid large amounts of alcohol while taking niacin.

Other minor side effects of niacin are stomach upset, intestinal gas, dizziness, pain in the mouth, and other problems.

When doses of over 3 grams per day of niacin are taken, more severe side effects can happen. These include liver problems, gout, ulcers of the digestive tract, loss of vision, high blood sugar, irregular heartbeat, and other serious issues.

When used daily for multiple years, niacin might increase the risk of developing diabetes.

Some concern has been raised about stroke risk in people taking niacin. In one large study, people who took high doses of niacin had a two-fold more significant risk of stroke compared to those not taking niacin. However, it is unlikely that this outcome was due to niacin. Other research has shown that niacin has no effect on the risk of stroke.

Allergies: Niacin might worsen allergies by causing histamine, the chemical responsible for allergic symptoms, to be released.

Heart disease/unstable angina: Large amounts of niacin can increase the risk of irregular heartbeat. Use with caution.

Gout: Large amounts of niacin might bring on gout.

Liver disease: Niacin might increase liver damage. Don’t use large amounts if you have liver disease.

Stomach or intestinal ulcers: Niacin might make ulcers worse. Don’t use large amounts if you have ulcers.

Surgery: Niacin might interfere with blood sugar control during and after surgery. Stop taking niacin at least 2 weeks before a scheduled surgery.

Fatty deposits around tendons (tendon xanthomas): Niacin might increase the risk of infections in xanthomas.

Thyroid disorders: Thyroxine is a hormone produced by the thyroid gland. Niacin might lower blood levels of thyroxine. This might worsen symptoms of certain thyroid disorders.

What Dose Is Used?

The following doses have been studied in scientific research:

For high cholesterol: The effects of niacin are dose-dependent. Doses of niacin as low as 50 mg and as high as 12 grams each day have been used. However, the most significant increases in HDL and decreases in triglycerides occur at 1200 to 1500 mg/day. Niacin’s most significant effects on LDL occur at 2000 to 3000 mg/day. Niacin is often used with other medications for improving cholesterol levels.

For treating hardening of the arteries: Doses of niacin have been as high as 12 grams daily. However, a dose of about 1 to 4 grams of niacin daily, alone or along with statins or bile acid sequestrants (a cholesterol-lowering medicine), has been used for up to 6.2 years.

For reducing the fluid loss caused by cholera toxin: 2 grams daily has been used.

For abnormal blood fat levels due to treatment for HIV/AIDS: Up to 2 grams daily has been used.

For metabolic syndrome: 2 grams of niacin has been taken daily for 16 weeks. In some cases, niacin 2 grams daily, alone or at this dosage, is taken along with 4 grams of prescription omega-3 ethyl esters (Lovaza, GlaxoSmithKline Pharmaceuticals).

What Other Names Is Niacin Known By?

Everything You Need to Know About Cider

Why So Salty? Everything You Need to Know About Salt