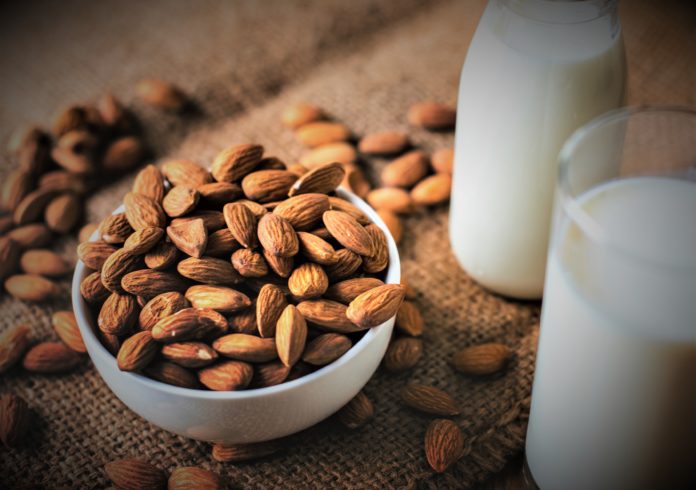 Many people are accustomed to drinking just cow’s milk, whether it be skim milk, whole milk, or percentages in between. But now there are other variations of “milk” you can drink that will improve your health, and one of those variations is almond milk. This milk has gained popularity over the years, and for good reason. Folks who are vegetarians and vegans can also enjoy almond milk, as it contains no dairy or animal byproducts! The health benefits, nutritional benefits, and general uses are endless, so get out there and purchase (or make) your own almond milk to see what we are raving about!

I couldn’t believe it when I learned that almond milk has been around since the middle ages. In medieval times, the people valued almond milk as a delicacy, and didn’t just drink it as a substitute for cow’s milk. They incorporated it into their finest dishes, and used it as a base for their fanciest sauces. The most-prized European medieval dish back then was called “blancmanger,” and it was chicken stewed with sugar and almond milk (3).

Almonds were most prevalent in the Middle Eastern countries, yet they still made their way over to Europe. It is suggested that almond milk gained popularity during Lent or days of abstinence (like Friday), when consuming dairy was not allowed, due to the religious beliefs of the Europeans during the Middle Ages. This was a luxury replacement because almonds were expensive to import.

Almond milk has stood the test of time and proved to be a popular substitution for regular dairy milk, especially in current times.

Homemade and store-bought almond milk have somewhat different nutritional profiles, especially when it comes to vitamin content. Commercial almond milk has vitamins added to it to make it more comparable to dairy milk; the makers have a better chance of marketing it as a dairy alternative if it has the same amounts of calcium and vitamins A and D as cow’s milk. In fact, almonds do not have vitamin D, and they have very little vitamin A, so the only way to have them in almond milk is to fortify it. Almonds have a lot of vitamin E, but most of it doesn’t make it into the milk, so that is also added when the milk is fortified.

The big thing to watch with store-bought almond milk is the sugar content. Every brand has several sweetened varieties of milk, many of them with fairly high sugar content. A single one-cup serving of “original” almond milk (any brand) has 7 grams of sugar, vanilla can have anywhere from 8 to 16 grams, and chocolate can have 20 grams! For regular drinking (and dairy substitute), unsweetened is your best bet. Save the sweetened varieties for occasional dessert uses.

Almond milk has no cholesterol, so it is a good choice for those needing to reduce their cholesterol intake. Those who are lactose-intolerant or allergic to dairy or soy can enjoy a glass of milk again without the accompanying issues. Vegans can enjoy “milk” without guilt, and anyone looking to lose weight will appreciate half the calories of cow’s milk.

Some may be tempted to use almond milk as a milk or formula replacement for babies, but that is dangerous. The amount of protein, vitamins, and minerals is severely insufficient for growing babies’ needs. Studies of infants who were fed plant milks as substitutes conclude that this causes severe nutritional deficiency which can result in malnutrition, failure to grow, anemia, rickets, scurvy, and more. The risks increase with earlier, extended, and exclusive use. Consult your doctor for appropriate foods to meet your baby’s nutritional needs.

There are so many uses for almond milk aside from just drinking it straight, as it can add a lot of rich flavor to many of your favorite foods. Are you a fan of healthy ice cream? Banana almond-milk soft-serve ice cream is tasty and lactose-free. It can be used to make French toast and smoothies too! You can make a myriad of desserts with almond milk, or you can go the savory route and make cauliflower mash (like mashed potatoes), which is cooked in unsweetened almond milk for a unique and silky flavor. If you want to make a creamy soup, try adding in some almond milk instead of cow’s milk (4).

Keep the benefits of all the fiber, vitamins, and minerals that are left behind too – dry the strained almond meal (in a dehydrator or an oven on low) and use it in a batch of granola, streusel topping, or cookies. Fresh almond milk can last for three to five days. Rawsome Creations has additional tips for those who want to make their own.

If you prefer to buy your almond milk, all of the brands listed below are available at grocery stores around the country, which makes them easily accessible to anyone wanting to try almond milk. You can also order almond milk from Amazon for a discounted rate, believe it or not! Because this plant milk does not have to be refrigerated, it can be shipped right to your doorstep with no fear of it spoiling.

If you buy almond milk, remember to watch out for high sugar content and check the almond percentage (if available) and the other added ingredients. Carrageenan, for example, is an often-used and highly contentious additive used to thicken the milk. The fewer the additives, the healthier the milk will be for you in the long run. Commercially prepared almond milk should be refrigerated after opening and used within seven days.

When you go to the store you will notice the plethora of available flavors, sweetening levels, and sizes of almond milk to choose from. So how do you narrow it down to choose the best option for your lifestyle? A great place to start is by simply knowing what each of them offers, so take a look below at the most widely distributed brands you are likely to see at your local grocer today. (5 *While many of these list “non-GMO almonds,” we cannot find any evidence that genetically modified almonds exist.)

Another widely known brand in grocery stores nationwide, this manufacturer uses 2 percent almonds in the milk. This is a very low number when you think about an entire carton. The flavors are: Original (7g of sugar per cup), Vanilla (13 g of sugar), Chocolate (20 g of sugar), Unsweetened, and Unsweetened Vanilla.

So Delicious Almond Plus

This specific brand markets that the milk contains five times more protein, as it is also made with rice and pea protein. The percentage of almonds used in the milk is not listed. The flavors are: Original (7g of sugar per cup), Vanilla (8g of sugar), and Unsweetened.

Not as popular as the options above, this particular brand offers a variety of flavors just like its competitors. There is no almond percentage listed. The flavors are: Original (7g of sugar per cup), Unsweetened, and Chocolate (18g of sugar per cup).

Whether you are trying it for the first time or continuing to use it, remember how favored this milk was back in the day. Even though it is easily accessible now, it still can be considered a delicacy!

Everything You Need to Know About Cider