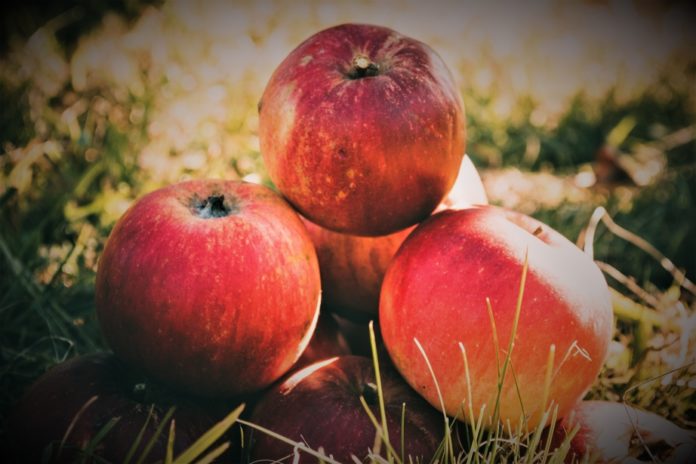 When you look at an apple, you might only see a shiny outside with a stem and a pretty color. Let me tell you, there is so much more than meets the eye inside of that apple, and the facts might just blow your mind! From being one of the healthiest foods on the planet to being one of the sweetest yet lowest-glycemic foods you will come across, it is nothing short of a phenomenon. Our forefathers prided themselves on distributing apple seeds to make sure our country was never short of apples, and for very good reason! Each section below has a plethora of information about apples that will make you appreciate every opportunity you have to bite into this amazing fruit even more from this point forward.

On average, each American eats apples more than any other fresh fruit? I believe it, because they are so tasty and so very good for you! On average, a gallon of apple cider is made from about 36 normal-sized apples. Take a look below at more fun facts you might not already know about apples, and be amazed the next time you see them at the grocery store.

Now that you are more familiar with apples, try to pick out a few varieties when you are at the grocery store. I know I get into the habit of picking the same apples each time, but there is nothing wrong with expanding your view on flavor and crunch with new apples!

The History of Apples

Many wonder how the apple trees even became a “thing” in North America, as they were not here before 1607. In 1607, the pilgrims settled in Jamestown, and they brought apple seeds and cuttings with them from Europe. They knew they enjoyed apples, and wanted to bring their prosperity over to the new land they were settling (thank you)! Many of the apple trees that were planted produced a rather bitter-tasting apple, but they later evolved into what we now enjoy today. The apple trees were very important to the Pilgrims because they produced fermented cider with the apples, which gave them a safe drink. (4)

Thomas Jefferson, one of our founding fathers, loved food immensely. The first ice cream in America – and some of its first pasta – are due to him. It seems he also was partly responsible for creating the Fuji apple. Apparently, he donated apple cuttings given to him by the French Minister Edmund Charles Genet to a nursery in Virginia, which created a type of apple called “Ralls Genet.” Much later, Japanese apple breeders cross-bred it with the Red Delicious and made the Fuji apple. (4)

Did you know that apples are symbols of love and beauty in Greek and Roman mythology? That is why you hear the saying “the apple of my eye” about something or someone we cherish. John Chapmen was also known as Johnny Appleseed and he was a lover of distributing apples to other lands. He wanted to prevent people from going hungry by making apples plentiful all over the country. He would collect seeds in small bags and distribute them to anyone going to the West. He would lease land to start apple tree nurseries. In total, it was said that he travelled over 10,000 square miles of the frontier and left an apple legacy across the country. (5)

We all have heard the quote, “An apple a day keeps the doctor away” but why do these small powerful pieces of fruit keep a doctor at bay? Because they are loaded with so many vitamins and minerals, which help the body, fight off germs, all while keeping your blood sugar stable! There are less than 100 calories in a medium-sized apple, so they make the perfect snack if you are looking to eat clean and not cheat! They are loaded with healthy fibers, valuable vitamin C, antioxidants, and phytochemicals, which help prevent chronic diseases like cancer and Alzheimer’s.

Even though apples are sweet, they measure low on the Glycemic Index, which shows how quickly your blood sugar will spike when you consume carbohydrates. These sweet treats don’t send your blood sugar levels through the roof too fast. (6)

Did you know that the pectin in apples is a prebiotic that feeds the friendly bacteria that help with the function of your gut? Also, apples are one of the best sources of the mineral boron, which contributes to the health of your bones! What can’t apples do? (7)

As touched on above, there are so many great health benefits of apples that will only enhance your health long term. According to Dr. Joseph Nordqvist, “… Researchers found that including apples in your daily diet may protect neuron cells against oxidative stress-induced neurotoxicity and may play an important role in reducing the risk of neurodegenerative disorders such as Alzheimer’s disease.” (8)

According to different studies, apples have the power to reduce bad cholesterol levels and also may reduce your risk for dementia, diabetes, stroke, and breast cancer. This just touches the surface of the power of apples and it is already very impressive to say the least. (8)

Now that we are familiar with all of the benefits of apples inside of the body, what are the uses outside of the body? There are a plethora of uses, such as making apple sauce, apple butter, fruit leather, pies, dehydrated apple slices, and apple chutney (just to name a few).  From desserts to apple cider to enjoy with friends, you will certainly not have a problem finding a food or activity to incorporate apples into!

Aside from food, you can also do fun projects like making stamps out of apple slices, making your home smell like heaven with an apple potpourri recipe, and make a friendly and chic centerpiece for your home. Certain studies have found that the pain of a headache can be reduced simply by sniffing a green apple. Apples also naturally help ripen food faster, as well as make brown sugar soft again! (9) There is no shortage of uses for apples aside from just eating them!

What is your favorite apple to bite into? One of my favorites is the Honeycrisp apple, but I also really like Fuji apples (thanks, Thomas Jefferson).

Interestingly, the famous technology company “Apple” named their brand after this variety of apple. John McIntosh discovered this apple seedling in 1811, and it is best used for snacking and applesauce.

Even though this variety has Thomas Jefferson’s name on its claim to fame, they were actually created in Japan in the late 1930s. The Fuji apple is a cross between Ralls Genet and Red Delicious. They are very sweet in flavor, which makes them popular among many people.

This apple originated in New Zealand, and it is a cross between Kidd’s Orange Red and Golden Delicious. It was patented in the United States in the 1970s.

This variety of apple is the most-recognized variety in the United States, and was originally brought here in the 1870s. It is said to be enjoyed best fresh or with your salad!

This apple variety is a cross between Honeygold and Macoun. It is very juicy and has a sweet-tart taste, which makes it a very popular variety all around the world.

We have all heard of this variety! Granny Anne Smith first discovered this seedling in New South Wales, and they have a sweet and sour taste to them. They are best enjoyed in pies or fresh with some yogurt. (10)

This online supplier of the freshest fruits and vegetables is located in Bird In Hand, Pennsylvania. They are a family-owned business that has passed down its knowledge and skillsets since the early 1900s. The family grows over 135 different varieties of fruit trees on 100 acres, so you are sure to find what you are looking for. Not only do they sell a variety of apples, but they also sell apple butter and apple cider. For a box of 16 apples, expect to pay anywhere from $23-26. To see the family’s website, click here.

In addition to their on-farm market which sells many kinds of fruits and vegetables (plus Christmas trees), this farm sells apples and other products online to customers just like you, and they allow you to mix-and-match varieties. With 20 apple varieties to choose from, you will most likely find what you are looking for. This online apple retailer is based out of Newark, New York and they do more than just sell apples. They also sell fruit butters, jams, fudge, ciders, and apple dips and wraps. They have tours of the Apple Shed, along with a country café to dine in if you are in the area. Depending on the variety of apple you can choose between a box of 18, 36, and 72 apple boxes ranging from $21.00- $37.00. To see their website for more information click here.

Don’t let the name fool you, as this online apple retailer sells more than just Honeycrisp apples. They sell a variety of apples (around 30 different types). They are based out of Greenwich, NY and sell around 20 different varieties of apples to both grocery stores and homes nationwide. They sell their apples in set numbers between 12 and 100, and the cost can range anywhere from $27.00-$75.00. To see their website click here.

Apples Online is an apple retailer located in Yakima, Washington. They sell their apples by the box, and you can choose from approximately 15, 40, or 80 (a bushel) apples per box. This farm was formerly known as Valicoff Gardens, and was a family farm since 1921. They offer seven different varieties of apples, as well as cherries, peaches, pears, nectarines, and apricots. This is all seasonal, of course! To visit their website or contact the company for pricing click here.

This particular orchard has been a fan favorite for those able to visit Massachusetts, and they pride themselves on delicious apples to sell nationwide. In order to make an apple purchase, you will need to call 508-867-6858. Most of their sales happen at their location, but they are willing to ship out apples boxes upon request. To visit their website click here.

Everything You Need to Know About Coconut Milk