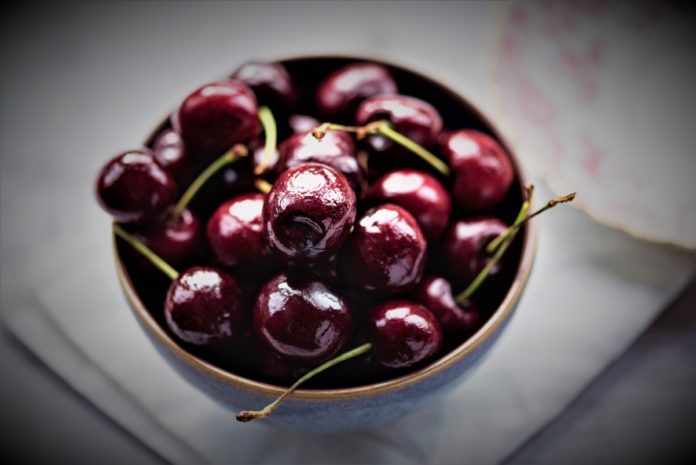 Summer time is prime time for cherry picking and, boy, is it satisfying to bite into a juicy cherry! If you do not have a cherry tree within reach, don’t worry; you still will have plenty of options to grab fresh at your local grocery store or farmer’s market in the summer. The cherry is a part of the Rosaceae family, and its cousins are plums, apricots, peaches, and almonds. Whether you are eating cherries straight off the branch, in a cherry pie, or drinking tart cherry juice you will reap its nutritional benefits and enjoy its amazing flavor all at the same time.

As stated in the fun facts, the first written record of cherries happened when the History of Plants was written in 300 BC. According to Hobby Farms, “The ancestors of today’s domestic cherries originated in the Caucasus Mountains and were carried to Rome in ancient times. There were no cherry trees in Italy until 74 B.C., says Pliny the Elder, but within 120 years cherry trees would ‘spread as far as Britain.’ ” [4] By the 17th century almonds, peaches, and cherries made their way over the Atlantic and hit America where they would later be grown in abundance.

In the United States, Pacific-coast production of fruit started in Oregon. Before 1847 it was not common to find many fruits growing in Oregon, so this marked a change of pace for the state:

Until 1847 the few cultivated fruits found in Oregon were seedlings mostly grown by employees of the Hudson Bay Fur Company.  On Saturday morning, April 17, 1847, Henderson Lewelling along with his wife and their eight children left Salem, Iowa where they had owned and operated a commercial tree farm and nursery.   With them they took 700 precious fruit trees.  Another Iowa fruit orchard owner, William Meek joined them with his own assortment of trees.  It took 31 weeks to cross through rugged territory to reach the banks of the Willamette River not far from Johnson Creek on November 19, 1847. [3]

Sadly, only 350 of the 700 trees survived the trek; they were planted nonetheless, and they flourished. The types of cherry trees planted were May Dukes, Black Hearts, Black Tartarians, and the Royal Ann. Of those different varieties of cherries the Royal Ann is the only cherry trees commercially grown to this day. Royal Ann cherries are eaten as they are, and they are also transformed into Maraschino cherries (more on that later).

One cup of sweet cherries has 87 calories, 1.5g of protein, and 3g of fiber. That same cup will provide one-sixth of your vitamin C requirement and is high in potassium. also has several other vitamins and minerals. [5] Cherries have a glycemic index (GI) rating of 22, which is very low for fruit. They also have a low glycemic load (GL), which means they will not cause a large spike in blood sugar. Since they are red, cherries are also a great source of anthocyanins, which protect against many diseases, such as cardiovascular disease and some cancers, and are useful in treating many conditions.

Cherries have a varieties of health benefits when you consume them in either fruit or juice form. They have been said to help you sleep better due to their natural melatonin levels present. Eating Well states, “The melatonin in tart cherry juice is very well absorbed and is utilized by the body to provide an effect that could rival melatonin supplements,” says study author Glyn Howatson, Ph.D.” [6]

Because they are also loaded with healthy levels of potassium, they act as a natural blood-pressure reducer. According to Stemilt (a cherry grower), “Potassium in cherries keeps the body functioning and plays a key role in muscle, heart, kidney and nerve cell functions. One cup of cherries has 260 mg of potassium.” [7] This is probably why runners love to drink cherry juice before and after long runs, so that their electrolyte levels are restored and maintained in the body.

There was an article written in Medical News Today about cherries naturally lowering your chance of a gout attack. The study that was conducted by Yuqing Zhang, a Professor of Medicine and Public Health at BU, recruited 663 people, and followed them online for over a year. One serving equated to a half cup each day. The results of the study were as follows:

When they analyzed the participant responses, they found of those who had eaten cherries in one form or another, 35% ate fresh cherries, 2% took cherry extract, and 5% consumed both. They also counted 1,247 gout attacks over the one-year follow-up, 92% of which were in the joint at the base of the big toe. They compared the cherry consumption against the gout attack incidence, and found those participants who ate cherries for two days, had a 35% lower risk of gout attacks or flares compared to participants who did not have them at all. [8]

If you are sore after a workout, tart cherry juice can help you ease away that muscle soreness due to their naturally high levels of antioxidants. The riper the cherry the more antioxidants it contains. Finally, one of the most important health benefits to note, “Sweet cherries are rich in beta carotene, vitamin C, anthocyanins and quercetin, which may work together synergistically to fight cancer. Plus, preliminary studies suggest the anthocyanin cyanidin may prevent genetic mutations that can lead to cancer and keep cancer cells from growing out of control.” [6]

The two kinds that are commonly consumed around the world are sweet and tart (or “sour”) cherries. Common sweet varieties include Royal Ann, Bing, Lambert, Rainier, and Balaton. They make a variety of dishes, sauces, and desserts for people worldwide to enjoy on a daily basis. Two common tart varieties are Montmorency and Morello.

On the other end of the nutritional spectrum lies the Maraschino cherry, which is a processed cherry product that is not particularly nutritious after all is said and done. Maraschino cherries start out as Royal Ann cherries, but then they undergo a strict brining process. They are soaked with sulfur dioxide and calcium chloride to bleach them completely yellow in color. This process takes around 45 days to complete. Once they are bleached, they are soaked in sugar (usually high-fructose corn syrup), artificial coloring, natural and artificial flavoring, and loads of preservatives. This process takes roughly 3 weeks to complete. The cherries, which are now bright red in color, are jarred up, and sent away for consumption. [9]

You can do a variety of things with cherries all year long, although they are best in the summer months! You can eat them straight off the tree, make jam, juice, and even cherry pies! Some of the most delicious desserts have cherries in or on them, so don’t miss out on trying a fresh cherry dessert this summer.

Everything You Need To Know About Garlic

Everything You Need to Know About Kombucha