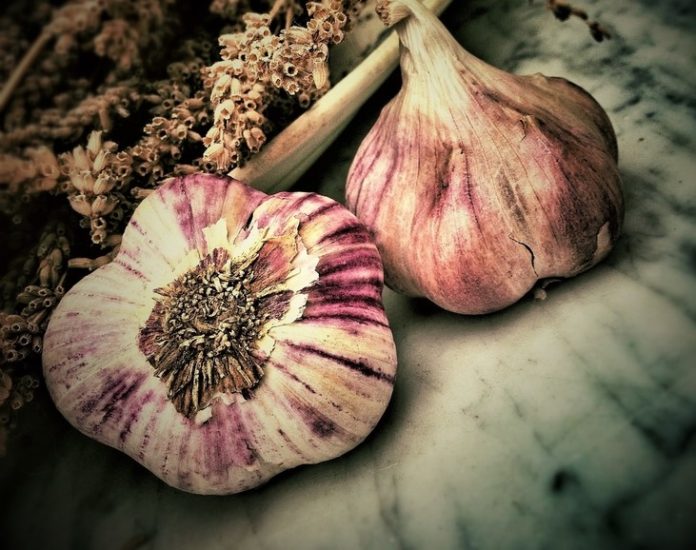 Garlic is a part of the Allium family, and is closely related to onions. Garlic is a food that is loved and adored by many people and added to flavorful dishes all around the world. Its strong and pungent smell is hard to miss, but its health benefits can be easily overlooked. Garlic has an abundance of medicinal properties that are good for both young and old. It can also be incorporated into delicious comforting foods like garlic bread and garlic mashed potatoes that make our palates salivate.

Garlic’s primary use was used for medicinal purposes and healing. It dates back as one of the oldest plants documented to help ward off diseases, and the oldest recorded use was back in ancient Egypt around 3200 BC. [2] Back in those days, there were many people who worked laborious jobs. Eating garlic was said to help maintain and increase strength to continue with the laborious jobs. According to Allicin Facts, they even used garlic in tombs of kings to try and preserve their strength. “Well-preserved garlic cloves were found in the tomb of King Tutankhamen who ruled from 1334 BC to 1325 BC.”

In the Ancient Roman times, around 8 BC “The chief physician of Nero’s army recommended garlic to ‘clean the arteries’ i.e. use garlic to improve cardiovascular status (the circulation of blood was not discovered until hundred years later).” [2] It was also used to help with gastrointestinal issues, seizures, joint pain, and parasites back in this day and age. It didn’t just head west however, as it was also used in both China and Japan for a lot of different reasons. They used it for curing depression, preserving food, and as a digestive aid.

From Asia to the Americas and from ancient times to recent history, garlic was seen as a cure for many illnesses. From treating some of the “great plagues” to helping one battle the common flu bug, it was seen as medicine for hundreds of years before it was seen as a food necessity. It was meant to be used as a medicine, which is why people didn’t overdo their consumption of garlic unless they truly needed it. It slowly moved into the kitchens and dishes of people worldwide, and has been consumed consistently for both culinary and medicinal purposes ever since.

According to Authority Nutrition, “A 1 ounce (28 grams) serving of garlic contains:

The amount of vitamins and minerals present in garlic is impressive as well, with it being rich in potassium, iron, zinc, selenium, manganese, and calcium. It also contains many different flavanoids and antioxidants which will also enhance your health. According to Nutrition and You, “It contains many flavonoid antioxidants like β – carotene, zeaxanthin, and vitamins like vitamin C. Vitamin C helps the body develop resistance against infectious agents and scavenge harmful, pro-inflammatory free radicals.” [4]

Garlic has many health benefits which is why it was popular before it was used in food, for medicinal properties. According to Well, “In a study published today in the Proceedings of the National Academy of Sciences, researchers show that eating garlic appears to boost our natural supply of hydrogen sulfide. [5] While hydrogen sulfide is poisonous at very high concentrations, the body naturally makes its own supply which aids in the increase of blood flow and the creation of healthy antioxidants.

Garlic can even help battle the common cold believe it or not. Authority Nutrition states, “One large 12-week study found that a daily garlic supplement reduced the number of colds by 63% compared with placebo.” Garlic also reduces the number of days of symptoms from 5 days to 1.5 (an improvement of 70 percent). Among the other health benefits, garlic has the power to reduce blood pressure and cholesterol levels and offset dementia and Alzheimer’s. Who knew that one little garlic clove could contain such a powerful punch?

Garlic is so tasty and it is easy to incorporate into your diet with many tasty dishes, so it comes as no surprise that people all over the world enjoy it daily. Many people don’t even eat it for the health benefits, as many times those get overlooked.

At first glance it may seem that there is only one kind of garlic, but there are actually three types (hardneck, softneck, and Creole) that incorporate hundreds of different varieties, and they all taste just a little bit different. They also offer up a slightly different set of nutritional values that make each type unique.

Just that; it has a woody stem that is surrounded by a single layer of fewer, larger cloves. It tends to be spicier than softneck and grows better in cold northern climates. It grows a flower stalk called a “scape” that is edible when picked early and tender. Usually there are around 4 to 12 cloves of garlic per bulb in hardneck garlic.

This has a soft stem of layers of garlic leaves and has several layers of smaller cloves. The majority of garlic at the store is softneck, as (generally) it stores better. It can have 8 to 30 cloves and is better for southern growing.

(Until recently) was thought to be part of the softneck group, but DNA testing showed them to be their own type. They came from Spain and France and came over with the Spanish conquistadors. They are milder than the other two types and grow best in climates with warm winters. The clove wrappers are pink or purple under the white head wrapper, and it has up to 12 cloves of garlic per head. This type of garlic does not come around very often, so when you see it be sure it pick some up!

Everyone loves a piece of garlic bread every now and then, so here is a recipe that will satisfy those cravings! This incredible recipe will have you second-guessing your urge to purchase pre-made garlic bread from the grocery store, and it takes no time at all! This recipe comes from Rachael Ray’s Food Network. [6]

Garlic is one of the tastiest and most nutritious plants, and it has stood the test of time. Though it is now used in foods more frequently than medicinally, it still serves a variety of purposes. Whether you are eating it on your bread or putting it in tea to alleviate a nasty cold, your body will reap the benefits tenfold with this premium food. Go out and get yourself a variety of garlics to experiment with and enjoy!

Why To Swap Refined Sugar for Honey and Maple Syrup?