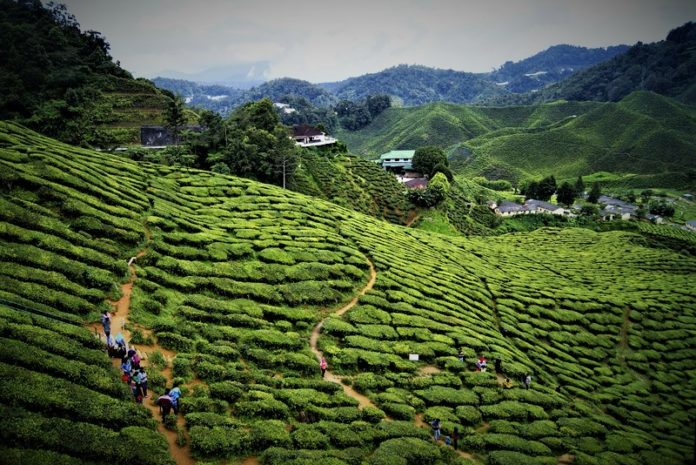 Green tea is a staple in most Asian cultures, but it doesn’t end there! Billions of people worldwide enjoy green tea and the benefits that come from consuming it. Its worldwide popularity isn’t by chance, as this super drink hosts many important antioxidants for overall better health and wellness. It sets itself apart from your regular black, oolong, or matcha tea in that its oxidation process is much different (more on that later). Green tea is chock full of vitamins and minerals that keep a body healthy, so do not shy away from enjoying the full benefits from your next piping-hot cup of tea!

It is said that the idea of brewing this delicious tea was discovered on accident by Emperor Shennong, when he was traveling along the countryside and needed a rest. When he stopped to rest and enjoy a cup of hot water, two tea leaves accidentally dropped into his cup from a twig near him. The leaves turned the hot water a different color, and it went completely unnoticed by the Emperor until he was done drinking his beverage. He noticeably felt more refreshed and rejuvenated after finishing his drink, and asked that it be prepared the same way for him after that.

Before the tea leaves were added to hot water and steeped, they were frequently eaten for the same benefits. This revelation changed the way people consumed tea from that day forward, making it one of Asia’s most coveted drinks [3]. By the 5th century, during the Tang dynasty, they would have actual tea ceremonies, which shaped Chinese social culture moving forward.

According to an article in Still Seeping, “Steaming – a method most universally associated with the production of green tea – is believed to have originated in China in the 8th century. Steaming halted the process of enzymatic oxidation– which causes the darkening of the tea leaves – and allowed the leaves to remain closer to their natural “green” state.” [3] With today’s advanced knowledge on steaming and pan-firing teas, this is the most common way to make tea in 2017.

First of all, what is green tea actually made out of? The leaves that make up green tea are from the plant called Camellia sinensis and they are usually harvested very last of any tea leaves. When looking into the actual nutritional benefits of green tea, you have to look into the tea grade as well. This varies based on leaf size, aroma, taste, and even color. Green tea is the least-oxidized tea in the world, compared to that of black and oolong tea. According to the World of Tea, “Oxidation refers to a series of chemical reactions that result in the browning of tea leaves and the production of flavor and aroma compounds in finished teas.” [4]

Green tea contains a variety of vitamins and minerals such as A, D, E, C, B, B5, H, and K. “The most important active component in green tea epigallocatechin-3-gallate (EGCG) is many times a more powerful antioxidant than vitamin C or vitamin E.” [2] On top of the many vitamins it contains, it is a good source of manganese and also has magnesium, zinc, chromium, and selenium, which all do a body good. Green tea is also very high in many antioxidants. Finally, tea is made up of 99.5% water, so it is very hydrating to the body, just be mindful that green tea contains caffeine even though it is a small amount.

Before we launch into the green tea benefits, it is important to know that choosing organic and checking country of origin is very important when buying. Even though it originated in China, green tea from China (even when organic) is high in toxic heavy metals. According to a study published in the Journal of Toxicology, organic green tea from Sri Lanka and Japan are the best choices. Sri Lankan organic green tea has low levels of lead, cadmium, aluminum and arsenic, while the Japanese version has moderate levels of all four. The same study also found that the levels were lower in tea brewed for only 3 minutes when compared with tea brewed for 15 minutes. So to avoid the damage possible from heavy metals and get the most benefits from your tea, buy from a good source and be careful not to brew your tea too long. [5, 6]

The antioxidants alone provide enough benefit to make this drink worth your while. Many antioxidants, such as polyphenols, catechin, and flavonoids, are all found within the tea leaf and are readily transferred to the water when brewing tea. Free radicals in the body cause aging, cancer, and disease, which is why antioxidants are important and do the work of neutralizing them. The antioxidants, all on their own, can help ward off diseases both minor and deadly.

There are also immunity benefits when you regularly consume green tea. This might be another reason why the Asian cultures are much healthier overall! According to Organic Facts, “Research shows that people who regularly drink green tea do not fall victim to common bacterial and viral infections as easily as those who do not add green tea to their diet. The message is clear. Green Tea boosts the strength of the immune system. The catechin present in green tea prevent bacteria and viruses from attaching themselves to cell walls in order to infect them.” [7]

Studies have shown that another benefit to green tea is its ability to help speed up your metabolism and help you burn fat and boost your energy levels. Taking green tea extract before exercise causes more fat oxidation, which is how large fat molecules are broken down into the smaller pieces that the body can use. While studies showed an increase in the metabolism of some subjects, the metabolism of those who were sedentary (not active) was not affected at all, so make sure to get some exercise to increase your green tea benefits. [8]

Green tea also may be able to protect the brain. According to Authority Nutrition, “Multiple studies show that the catechin compounds in green tea can have various protective effects on neurons in test tubes and animal models, potentially lowering the risk of Alzheimer’s and Parkinson’s.” [8] Drinking this hot tea everyday has many positive health benefits internally, but it also just makes you think more clearly and feel better overall. There is no harm in drinking this supplement several times a day, or even more!

Most people think green tea is only for drinking, but there are actual many other interesting uses for it! Green tea bags have the power to reduce eye puffiness after they are done brewing. To try this, brew two bags of green tea, squeeze the liquid out of them, let them cool, and place them on your closed eyes for 10 minutes. Green tea can also act like Aloe vera and sooth a sunburn due to its anti-inflammatory properties. Dip a cloth in green tea and then place it over the irritated skin for relief. [9]

Along the same lines, you can use green tea as a toner for your skin. It is often added to commercial beauty products, after all. Simply put cooled brewed tea into a clean spray bottle to apply before your facial moisturizer (store it in the refrigerator). Finally, if you have a kitty at home, adding a few hidden leaves to his or her kitty litter can help keep the odors at bay. Next time you are done cleaning the litter box, you will be thankful for this little tip!

Most Popular Types of Green Tea

The quality of your green tea really does matter when you are looking at health benefits, steeping practices, and overall flavor benefit. There are many different grades, and price ranges can costs upwards of hundreds of dollars for just one pound due to the way they are harvested and grown. The best green teas have a slightly sweet aroma to them and leave a fresh green aftertaste on your tongue. [10] Green tea has a very short shelf life, so the sooner you drink the tea you purchase the more benefits you will reap.

The best teas are cared for within 2 hours of harvesting, and they are steamed quickly to stop the oxidation process on the leaf. The minimum you should steep a tea like this is no less than 30 seconds. For a green tea that is of lesser quality the maximum time you should steep is 3 minutes. According to Beauty Ticket, the best green tea brands in the world are Matcha Tea Organic, Sencha Tea by Harney and Sons, and Tazo green tea. To see the full list click here.

It’s no wonder people of all cultures enjoy the rich taste of a good green tea, as it brings calm and rejuvenation to those who drink it. It can be added to ice creams, fancy drinks, and desserts to make it all the more enjoyable for you in every aspect of dining. However, drinking old-fashioned tea like Emperor Shennong did all those years ago is still popular in this fast-paced society we live in today.

Everything You Need To Know About Garcinia Cambogia

Everything You Need to Know About Soy Milk