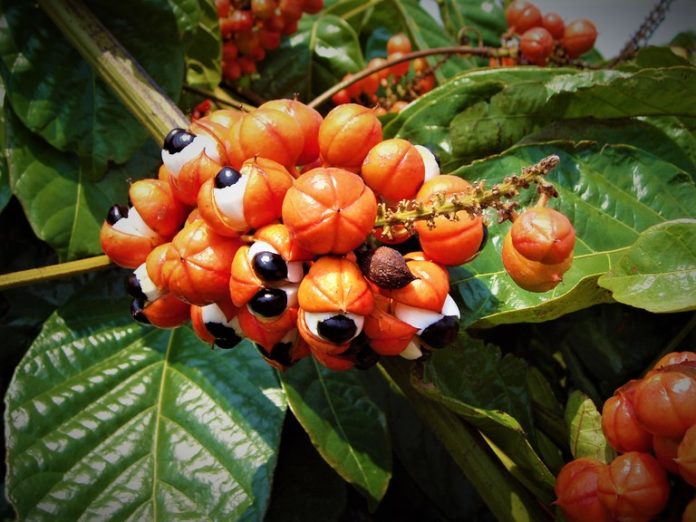 Guarana (Paullinia cupana var. sorbilis), also called guaranaina, guaranauva, uarana, or narana, is a plant native to the central Amazon basin. When immature it has a dark green color, which matures to a variety of hues from yellow-orange to bright red. The seeds are dark brown with a hard shell, and are partly enclosed by a chalky white aril, a “coat” which seems to protect the seed against moisture loss. When the fruit is mature, the outer pod splits to uncover the white aril and the seed. The dark seed, in contrast with the red color of the shell and the white of the aril, looks like a human eye, giving guarana a unique appearance. [1]

The seeds are used commercially because of their caffeine content. When the seeds are dried or roasted, they can be used to produce goods with high caffeine content (2.5 to 6 percent), 2 to 5 times higher than that of Arabica coffee beans. Roasted seed extracts have been used as medicinal beverages for centuries, due to their reputation as stimulants, aphrodisiacs, and tonics, as well as protectors of the gastrointestinal tract. Guarana is commercially cultivated exclusively in Brazil to supply the soft-drink industry and natural product goods around the world [1]

Where Can We Find Guarana?

About 70 percent of Brazil’s national production of guarana seeds is used in the beverage industries of Amazonas, which comprises a large variety of drinks. Among these varieties, an average of 45 percent goes to the production of the carbonated drink Guaraná. The other 25 percent is for the production of guarana extract and guarana syrup, which are mostly used to increase the caffeine content of beverages. Guarana powder is also on the market, but in lesser amounts for consumption in home-produced energy drinks or for direct intake as a tonic packed in gelatinous capsules or packets. Guarana is also used in the production of pharmaceuticals and cosmetics. [1]

The formula for energy drinks containing guarana differs between product varieties, and even over time with the same product name, but they usually contain one or more of the following plants:

Other ingredients vary from bee pollen to fruit juices, zinc, arginine (a non-essential amino acid that may improve the immune system and promote muscle growth) and creatine (a supplement taken by some to increase muscle mass). [2]

Guarana is largely known for its energetic and curative properties. Aboriginal people used the guarana powder as an elixir to promote long life; its taste is slightly bitter, astringent and acidic. Guarana has been broadly used in the pharmaceutical market because of its caffeine content, which stimulates the central nervous system.

The improvement of memory, reaction time, speed of information processing, alertness, mood and performance in physical exercises, as well as thermogenic effects associated with weight loss and gastric acid secretion, have been attributed to guarana. A study published in The Journal of Alternative and Complementary Medicine reported that guarana could be a favorable alternative for the treatment of mental and physical fatigue associated to cancer, because its use lacks significant side effects and it is cheaper than traditional drug therapy. [3]

Guarana has also been attributed with inducing a weak diuretic (increased urination) effect that might be related to the presence of theobromine, which has a known diuretic effect.

The use of guarana has been evaluated for metabolic disorders because it has functional properties similar to green tea, which is also rich in catechins. Studies have observed that guarana positively influences fat metabolism, boosts basal energy and weight loss, and can be useful for obesity treatments. A study of Amazon River Basin peoples also reported that seniors who took guarana had a lower incidence of hypertension (high blood pressure), obesity, and metabolic syndrome, compared to those who did not. [1] [5]

Another study, published in Planta Medica, looked at the physiological effect of purified guarana extract (containing caffeine and tannins) on rats. After the intake of the guarana extract, they observed an antidepressant effect on the animals; consequently, the extract could be used to produce dietary supplements for mood disorders, such as panic disorder. Further testing will need to be done, of course, to see if the results are the same in humans. [6]

The positive influence of guarana extract on attention, memory, and mood performance were also observed in humans in a second study, published in 2004, using simple formulas and in combination with Panax ginseng (Ginseng supplement). Similarly, a third study in 2006 evaluated the effect of the consumption of guarana extracts with low doses of caffeine on humans; they observed an increase in the cognitive performance of these people. [7] [8]

A combination of dried herbs containing guarana prolonged gastric emptying—how fast food leaves the stomach and enters the small intestine—stimulating an increased feeling of fullness, which resulted in weight loss.

Some researchers observed that guarana protects against the physiological and psychological effects of stress. Because of a synergistic association among its compounds—they work better together than individually—guarana can offer benefits over time for general health, particularly for cognitive performance. [1]

Others studies reported that the consumption of guarana is related to a lower prevalence of cardiovascular metabolic diseases and has positive effects on lipid (fat) metabolism mostly related to low-density lipoprotein (LDL—the “bad” cholesterol) levels. [9]

Is Guarana Ever Bad for You?

The FDA recognizes guarana—which contains caffeine in addition to small quantities of theobromine, theophylline, and tannins—as generally safe for use as a food flavoring in minimum quantity for the intended effect. But even though guarana is safe, it should be consumed moderately because it contains caffeine. Young people consume guarana to offset drowsiness, but should be aware it cannot replace the need for sleep. [10]

A study involving both acute and chronic dosing of rats and mice, in the range of 1000–2000 mg/kg, reported that guarana did not have any toxic effects. Further testing will need to be done, of course, to see if the results are the same in humans. Nevertheless, excess caffeine does have well-known side effects. Guarana must be used carefully, and avoided in patients with hypertension and other cardiac conditions. [11]

There is still much to know about guarana, especially concerning its biological components and its potential applications in the food and pharmaceutical industries. In general, caffeine has been the main reason to study guarana because the seeds contain a high amount. Many side effects observed were related to the caffeine.

Every supplement affects every individual differently. Gender, age, sometimes race, pre-existing medical conditions, and individual body chemistry—as unique as a fingerprint—can affect how a supplement works on you. That’s why supplements always add that “individual results may vary” disclaimer. Only you and your doctor can figure out how it works for you, so always be forthcoming and transparent with your doctor about side effects you experience, as well as if the substance doesn’t seem to be doing anything for you.

Everything You Need To Know About Goat Milk