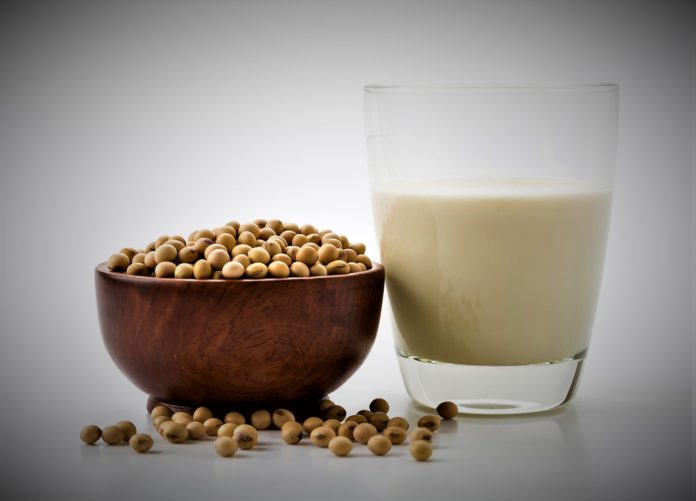 Soy milk hasn’t always been around, and some love it and some hate it. This could reign true for thousands of food items around the globe. However, there are many interesting facts about soy milk that might surprise and intrigue you. It was first discovered in Asia and was originally just as a step in the production of tofu. It contains many nutritional properties, but there is a lot of controversy around it. Whether you have a dairy allergy, no allergy, or like to eat vegan/vegetarian this type of milk might fit, but probably is best in moderation.

1. “The soybean plant originated in China and made its way to North America in 1765.”
2. Genetically modified soybeans hit the market in the 1990s and now a large majority are genetically modified, which gives it a bad reputation in the health world.
3. “Soybeans maycontain [sic] up to 48 percent protein.”
4. “Between 2000 and 2007, U.S. food manufacturers introduced over 2,700 new foods with soy as an ingredient.” [1]
5. “One acre of soybeans can produce 82,368 crayons.”
6. “During the Civil War, soybeans were used in place of coffee because real coffee was scarce.”
7. “Soybeans also find their way into candles, cleaning products and hair-care products.” [2]
8. “A German named Englebert Kaempfer brought soybeans to Europe in 1712.” [3]
9. “In Asia, soybeans are often eaten whole, but in Western countries heavily processed soy products are much more common.”
10. “Various soy products are available, including soy flour, soy protein, tofu, soy milk, soy sauce, and soybean oil.” [4]

Soy milk production has been occurring since before 25 A.D. and has spread throughout the world since then. The earliest evidence of soy milk or tofu production in those ancient times came from art on stone slabs, and eventually with a poem called “Ode To Tofu” in A.D. 1500. [5] The first reference to soy milk in Europe was in 1665, but it didn’t refer to actually drinking the milk; instead, it referred to soy milk as a step in making tofu. In 1866 Frenchman Paul Champion mentioned that the Chinese drank hot soy milk for breakfast, and that was the first inkling of soy milk consumption.

Contrary to popular beliefs, even though the soybean plant originated in China doesn’t mean it is a staple food in the Asian diet. In fact, soy is eaten in very small amounts unless disaster strikes, and it should be the same around the world due to the many controversies surrounding how healthy soy actually is. During food shortages soybeans were consumed more often, but the people used long fermentation times to get rid of the soy toxins. [6] According to the Soy Info center, “The present American English term “soymilk” evolved slowly, through many metamorphoses. The earliest references to soymilk were all in connection with the tofu making process, where the soymilk was mentioned only in passing. It was referred to variously as “the solution of legumin” (Kellner 1889), “this filtered stuff” (Rein 1889), “the fresh milky liquid” (Inouye 1895), “the milky white liquid” or “the filtrate of the cooked soybeans resembles milk” (Blasedale 1899).” [7]

Until the early 1900s you could only find soy milk in China, where it was made in small shops in small quantities. “The first calcium fortified soy milk was produced in 1931 by Madison Foods, Tennessee. In 1939 Miller started to produce canned liquid soy milk, which was called Soya La, because the dairy industries prevented Miller from calling the product ‘soy milk.’” [5] In the first half of the century, there was interest in soy milk to feed infants in China and also to replace milk for those in the West who were allergic to cow’s milk.

For that reason, some small soy “dairy” farms were formed both in China and in the West. The latter half of the century saw a boom in the popularity of soy milk soda in East Asia and, due to new production methods, increased interest in the United States because of the improved (less “beany”) flavor.  Soy milk spread in popularity throughout the world, and it is common to find it in most countries today.

Soy milk is created by simply soaking soybeans in water, grinding them with fresh water, and filtering out the solids. It contains no dairy which is helpful to people with dairy allergies, as well as vegans and vegetarians. One cup of soy milk has 131 calories, 8g of protein, 15g of carbohydrates, and 4g of fat. [8] One glass of soy milk is equivalent to one serving of protein. It has all nine of the essential amino acids, which would make it a complete protein, except that the levels of two of these are quite low.  It contains about 1.2 grams of sugar for every 8 oz. consumed. This is a low amount of sugar, which is good. However, as a milk substitute it is short on calcium, as the daily recommendation is around 1,000mg, and soy milk only contains around 299 mg per serving.

Soy milk contains 0.5 g saturated fat, no trans fats, and no cholesterol, making it seem a good choice regarding fats. However, the ratio of omega-6s to omega-3s is nearly 8:1, and the ideal ratio is 1:1. According to a study on NCBI, a very high omega-6 to omega-3 ratio “promote[s] the pathogenesis of many diseases, including cardiovascular disease, cancer, and inflammatory and autoimmune diseases, whereas increased levels of omega-3 PUFA (a low omega-6/omega-3 ratio) exert suppressive effects.” [9] If used, this is best in moderation.

Throughout the years there has been a variety of studies done about the positive and negative effects of soy. It is one of the most controversial foods in the world due to the vast amount of opinions and research done. Some people believe it is a health wonder, while others think it is straight poison to the body.

There are a variety of articles done about both positives and negatives to consuming soy milk and soy products in general. Sadly, there are more negatives than positives to your overall health regarding this product. Soy milk is loaded with fatty acids and lipids which should improve your blood health, and “studies have shown that regular intake of soy can significantly lower your blood concentrations of triglyceride and low density lipoproteins (LDL) and raise the level of high density lipoproteins (HDL).” [10] Soy milk also has the ability to strengthen your blood vessels with its omega-3 and omega-6 fatty acids. It therefore strengthens and protects those vessels from hemorrhaging and lesions.

So what makes this milk of choice not popular among some health enthusiasts? Largely, that is its estrogenic capabilities. This is the hot-button topic with soy milk and soy products that have people running for the hills. According to Authority Nutrition:

“Soy contains large amounts of biologically active compounds called isoflavones, which function as phytoestrogens… that is, plant-based compounds that can activate estrogen receptors in the human body. These isoflavones are classified as endocrine disruptors, chemicals that interfere with the normal function of hormones in the body.” [11]

And an article on NCBI says:

“Clinical and experimental studies examining the impact of soy or soy phytoestrogen consumption on human health have produced mixed and often conflicting results. Of even greater concern is that emerging evidence suggests that exposure to these compounds may, in fact, pose a risk to some groups, particularly infants and the unborn. So are they helpful or harmful? The answer is undoubtedly complex and may ultimately depend on age, health status, level of consumption, and even the composition of an individual’s intestinal microflora.” [12]

It is not a staple in Asian cultures for a reason, and these cultures are known for their health and long life. They only consume soy consistently if there is a famine or other event that creates a food shortage. Take their lead and use soy products sparingly.

When you go to your local grocery store, there are a variety of soy milk brands to choose from, so what do they all offer? Most of them are very similar, but there are several different flavors too. Silk is a popular variety, but there are also popular private label brands such as 365 (Whole Foods) and Trader Joe’s brand. A brand called West Soy has also been popular throughout the years, as well as Zen Zoy. Other notable brands in the soy milk department are Earth Balance, Greenway, Soy Dream, and Pacific. [14]

You will notice many different soy milk flavors to choose from such as vanilla, almond, peach, strawberry, blueberry, chocolate, and coconut. Please be aware that added flavor will increase the sugar content to the soy milk.

There is a lot to weigh when considering including soy milk in your diet, and we hope the information included here will help you in that decision.

Everything You Need To Know About Oatmeal