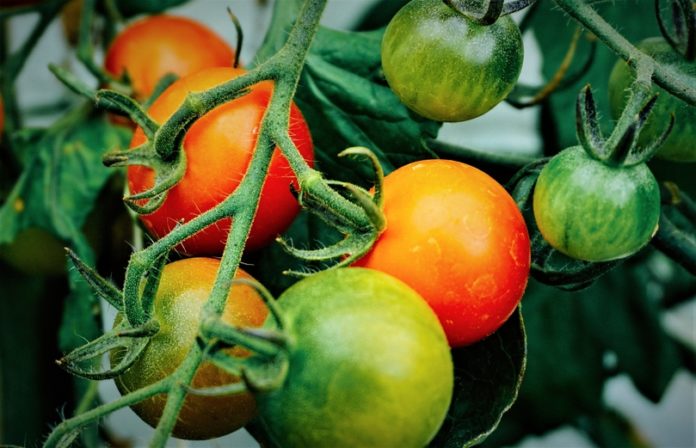 Tomatoes are a staple to every Italian dish, Mexican salsa, and kitchen worldwide. I can’t imagine life without tomatoes, because they are used in so many dishes and flavors throughout cultures. These delicious, yet versatile, fruits can be used in tomato sauces, tomato soups, and tomato pies to round out a delicious meal or appetizer. Whether you like sweet tomatoes, fried green tomatoes, or just rotten tomatoes, you are in luck with the benefits you will reap from consuming them. They are one of the easiest plants to put into your garden, and never disappoint in their harvest as long as you are watering them. Grab yourself a handful of tomatoes, some olive oil, salt, pepper, and balsamic vinegar for the largest flavor explosion possible.

Tomatoes were first cultivated by the Aztecs back in 700 AD, and they originated in the regions of Peru, Chile, and Bolivia. They were not brought over to Europe until the 16th century, and it was the Spanish conquistadors who first brought them over. In Europe, people took quite nicely to the tomato and it spread throughout European kitchens abundantly. In Great Britain, however, the tomato was first thought to be poisonous, so they avoided it for quite some time. There was a larger fear of eating tomatoes with the rich versus the poor due to their tableware choices in the 1500s. According to Veggie Cage, “Rich people in that time used flatware made of pewter, which has a high-lead content. Foods high in acid, like tomatoes, would cause the lead to leach out into the food, resulting in lead poisoning and death. Poor people, who ate off of plates made of wood, did not have that problem, and hence did not have an aversion to tomatoes.” [3] Tomatoes were hence eaten by  poor people until about the 1800s. So what changed? There was a mass immigration that occurred, and tomatoes went right along with it.

Today there is an abundance of Italian Americans that migrated over to the United States, which essentially brought an influx of tomatoes, tomato sauce, as well as tasty appetizers like bruschetta and caprese salad. The largest debate over tomatoes is whether or not they are a fruit or a vegetable. It is said because the tomato grows from a flowering plant, they have to therefore be considered a fruit. However, many people still automatically characterize it as a vegetable by default. “Botanists claim that a fruit is any fleshy material that covers a seed or seeds whereas a horticulturists point of view would pose that the tomato is a vegetable plant.” [3]

One of the main nutrients that makes tomatoes so nutritious is lycopene, which is an antioxidant that helps deter certain forms of heart disease and cancer. [4] Tomatoes are full of potassium, vitamin C, Folate, and vitamin K. Ironically, tomatoes are made up of about 95% water and the rest is carbohydrates and fiber. [5] Alongside of lycopene, tomatoes also contain beta carotene, naringenin, chlorogenic acid, and chlorophyll at the very beginning when the tomatoes start out green.  Specifically with beta carotene, it converts to vitamin A in the body, which gives you multiple health benefits.

The vitamin A in beta carotene helps to maintain nerve function as well as healthy eyesight in the body. According to Nutrition and You, “Fresh tomato is very rich in potassium. 100 g contain 237 mg of potassium and just 5 mg of sodium. Potassium is an important component of cell and body fluids that helps with controlling heart rate and blood pressure caused by sodium.” [6] On top of the nutritional properties already listed, tomatoes contain riboflavin, thiamin, iron, calcium, manganese, and niacin. These all have wonderful nutritional properties that can only benefit those consuming it.

According to Medical News Today, “One medium tomato (approximately 123 grams) provides 22 calories, 0 grams of fat, 5 grams of carbohydrate (including 1 gram of fiber and 3 grams of sugar) and 1 gram of protein.” [7]

That is a lot of nutrition is just one small tomato. Your body will be reaping the benefits with every single bite.

If you thought the nutritional benefits were large, the health benefits are even larger. Simply by eating tomatoes, your body gets a boost in nutrients and advantages like never before. Because of the abundance of antioxidants and vitamin C, tomatoes are  great fighters against cancer. While they do not cure cancer, they sure help keep the body healthy in the process. Tomatoes help fight off the free radicals that cause cancer in the body, and lower blood pressure in the process. Due to the large amounts of potassium found in tomatoes, they help decrease constriction in the blood vessels. On top of lowering blood pressure, there are also benefits for strengthening heart health, eye health, skin health, and maintaining blood sugar levels as well.

For pregnant women, tomatoes are rich in folic acid, which helps the baby form healthy brain functions and defends it from neural tube defects. For those of you who are not pregnant, they also help uplift your spirits and mood by triggering the serotonin levels in the body. The main benefit when eating tomatoes comes from the powerful antioxidant, lycopene, as mentioned above. This property found in tomatoes truly helps the body fight free radicals of all forms, which in turn will create multiple health benefits in the body.

There are a variety of tomatoes with different shapes, tastes, and colors. Some famous tomato types most people are familiar with are Cherry tomatoes, Heirloom tomatoes, and Roma tomatoes.

Within this variety of tomatoes, there are so many different types of cherry tomatoes you can buy or even grow in your garden. Some different varieties of these small, yet flavorful, tomatoes are sweet 100, sungold, black cherry, and the sunrise bumble bee.

Many people hear this term, but they do not know what it means. In order to have an heirloom tomato, the seeds have to be at least 50 years old, which makes it part of a very old family line. There are many different variety of heirloom tomatoes that come from this line, as they vary in size, color, and even flavor.

This is one of the most well known varieties of tomatoes you can buy or grow due to its informative name. We know that tomatoes are essential throughout Italy, so what better name to give these large, red, and juicy tomatoes than Roma. Typically large in size and juicy, this tomato goes well with a variety of sauces, entrees, and appetizers throughout cultures. [8]

From scrumptious bites of bruschetta, tomato basil soup, and mouth watering salsa to a divine tomato sauce, the possibilities are endless when it comes to the uses of tomatoes. This versatile, yet healthy, food is known among the masses and used around the world in many cultural dishes. You can even soak in tomato soup if you get sprayed by a skunk to take the smell out! There is nothing heartier than a homemade tomato sauce simmering in the kitchen, so I wanted to provide a simple and easy recipe to have on hand! Make this for large groups, your family, or just yourself, and be completely satisfied.

Everything You Need To Know About Avocados