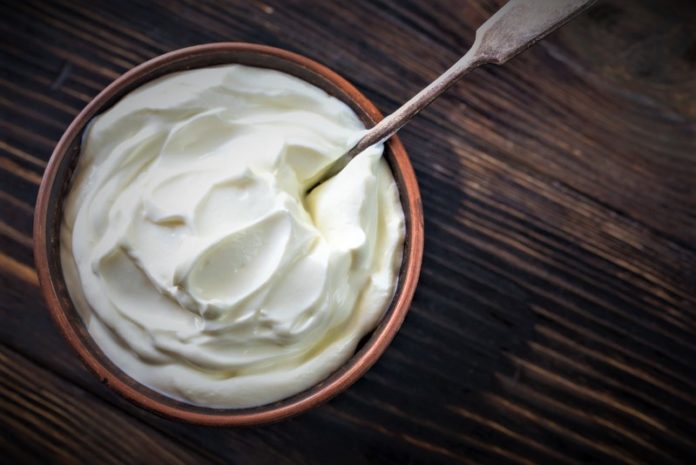 Yogurt is a versatile, healthy, and popular snack among both young and old. It is one of the most popular forms of dairy in the world, and is enjoyed throughout many different cultures and dishes. Yogurt is simply live bacteria being added to milk, and then fermented. It does not sound appetizing when you think about it in that nature, but it is healthy for your digestive system and it tastes good too! It can be consumed in the form of a snack or sauce, or even in desserts and yogurt dips.

The word yogurt is Turkish, and its root yog means “to condense or intensify.” According to Dairy Goodness, “Most historical accounts attribute yogurt to the Neolithic peoples of Central Asia around 6000 B.C. Herdsmen began the practice of milking their animals, and the natural enzymes in the carrying containers (animal stomachs) curdled the milk, essentially making yogurt.” [4] This process actually came about by accident, and the flavor and consistency of the yogurt was enjoyed by people, so it eventually stuck around.

Fast forward to 1542 in France, and it is recorded that the king (Francois I) was having severe gastrointestinal problems, and they couldn’t find anything to relieve his symptoms. According to Down To Earth, “Suleiman the Magnificent, the Sultan of the Ottoman Empire and an ally of the throne of France, sent a doctor who cured the king with yogurt: the news of the benefits of this unknown food started to spread in France and in Europe.” [5]

In the early 1900s the company Dannon was created, and an industrial process was created to make yogurt in factories under a specific method. Today “we make yogurt by pasteurising milk, enriching it with powder milk to boost its protein and calcium content, then heating it to 43°C and adding two types of bacteria: Streptococcus thermophilus and Lactobacillus bulgaricus. The variety of flavours and packaging we are familiar with were also introduced throughout the 20th century, with added fruit jam in 1933 (patented in Poland), fruit yogurts in 1937, cardboard pots in the 1950s and blended yogurt in 1963.” [5]

Yogurt is packed full of friendly vitamins, minerals, and probiotics which all aid in better gut health overall. There are two types of protein that can be found in yogurt, one of them being whey and the other casein. Yogurt in general has a lot of protein, with 80% of it being caseins. Casein can help lower blood pressure and increase the amount of minerals that are absorbed, such as calcium and phosphorus. [6] Whey protein accounts for the other 20 percent, but it still packs a mighty punch. Whey protein is very high in branched-chain amino acids (BCAAs) and may aid weight loss and lowering blood pressure. [6]

The fat and protein content greatly depend on which kind of yogurt you are eating, as regular whole yogurt does not contain as much fat and protein as Greek yogurt does; Greek yogurt is strained, and its fat and protein become concentrated in less volume. We would all love it if frozen yogurt contained all of the health benefits that regular yogurt holds, but we know that is not the case based on its sugar content. In regards to carbs, there is a small amount of carbs that come directly from sugar or lactose which is also referred to as milk sugar. Other forms of sugar can be directly added in by the manufacturer, and this amount of sugar can vary greatly depending on brand, flavor, and fat percentage.

Regarding actual vitamins and minerals, regular yogurt is loaded with vitamin B12, calcium, phosphorus, and riboflavin. Because there are so many different types of yogurt on the market today these nutritional values will differ. Depending on whether or not it is Greek, low fat, regular, or fat free, there are different values associated with each. The lower the fat the higher the processed sugar typically, so it is best to opt for a fattier yogurt with less sugar for optimal benefits.

As stated above, the less sugar the better the yogurt will be for you, which is why Greek yogurt has become so popular in today’s society. It packs more protein and less sugar per bite, which will keep hunger away for longer periods of time. There are many different health benefits to having yogurt around the house, and sometimes it doesn’t even have to be eaten. Yogurt can be used as a natural face mask because it contains lactic acid which works the same as a chemical peel treatment would. It also works to naturally exfoliate the skin and get rid of dead skin cells that are clogging pores. [7]

On top of yogurt being a good source of protein and healthy fats, it also contains probiotics, which are great for maintaining optimal gut health. And, as stated above, yogurt helps lower blood pressure. In addition, Authority Nutrition tells us that “one cup also provides 38% of your daily need for phosphorus, 12% for magnesium and 18% for potassium. These minerals are essential for several biological processes, such as regulating blood pressure, metabolism and bone health.” [8]

On top of how good it tastes, there are many health benefits to consuming yogurt that go past face masks. Yogurt has the ability to ward off osteoporosis due to its calcium content, strengthen your immune system from intruders, and provide you an ample amount of protein per serving.

How To Make Yogurt

It is one thing to buy your favorite yogurt at the grocery store, and indulge but another to make it from scratch. It is relatively easy, but will take some time and monitoring to ensure it is being made correctly. It saves on cost long term, and it tastes delicious, so there are really no downsides to it other than the time it takes. The recipe comes from The Kitchn, and it has been popular with many people.

Everything You Need To Know About Snap Peas