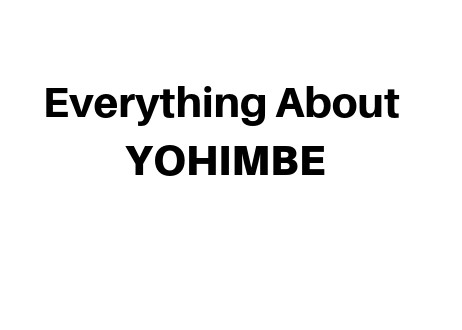 Yohimbe (Pausinystalia yohimbe) is an evergreen tree belonging to the family Rubiaceae, native to central Africa. It is recognized worldwide for its most active compound, yohimbine, extracted from the bark. The indigenous population of central Africa have used the bark for centuries as an aphrodisiac and to improve sexual performance. [1]

Yohimbe and other supplements for erectile dysfunction are valuable alternatives to prescription medications as they are cheaper and can be procured without a prescription. Yohimbine has been developed as a pharmaceutical drug, yohimbine hydrochloride (HCl), and investigated in several clinical trials for treating sexual dysfunction. [1] [2]

Where Is Yohimbe Found?

In a study on 11 patients with erectile dysfunction and a sexually functional control group, the effect of oral yohimbine (up to 30 mg/day) was evaluated on a number of objective and subjective measures of erectile response, using daily logs and laboratory procedures involving response to visual sexual stimulation (VSS). During VSS, patients treated with yohimbine noticed that it was significantly easier to get an erection, reported stronger reactions in their penis, and evaluated their erections as fairly stronger. [3]

Yohimbine (5.4 mg) in combination with pentoxifylline (400 mg) was used for 10 weeks in ten male subjects with anxiety and mild-to-moderate ED. Seven patients observed a return of erection satisfactory for intercourse and continued the medication. [4] [5]

Yohimbine has been reported to be valuable in the cure of antidepressant-induced sexual dysfunction in patients with depression, including those taking selective serotonin uptake inhibitors (SSRIs) and tricyclic antidepressants. In a study, yohimbine was found to be safe and significantly more valuable than amantadine or cyproheptadine in reversing SSRI-induced sexual dysfunction. Yohimbine caused much improvement in 71 percent of the patients. The most common adverse effect identified with yohimbine was agitation, which contributed to dropped use in three patients. [6] [7]

Some clinical studies have suggested that yohimbine combined with antidepressant treatment may increase the treatment’s effectiveness.  Antidepressants have been shown to provoke sexual dysfunction in patients with depression, regardless of gender. Yohimbine has been reported to benefit antidepressant-induced sexual dysfunctions in some depressed patients. After the intake of yohimbine, the mood of some patients changed positively. [6]

A 72-year-old woman with severe orthostatic hypotension (extreme drop in blood pressure when standing up from sitting or lying down) due to diabetic nerve damage was successfully treated with yohimbine. Treatment with oral yohimbine (12.5 mg daily for 6 months) resulted in a steady rise in blood pressure, which permitted the woman to recover a considerable degree of mobility. Yohimbine has also been used effectively to cure orthostatic hypotension in patients taking  tricyclic antidepressants for depression. [6]

Four out of six impotent diabetics who reported incapacitating paraesthesia (“pins and needles”) of the lower limbs presented prompt relief after the intake of oral yohimbine (6 mg). Stopping the treatment after eight weeks caused the reappearance of the paraesthesia, which vanished again after restarting yohimbine therapy. No adverse effects were observed. [6]

A high intake of yohimbine (0.65 mg/kg) administered to 10 patients with Alzheimer’s disease significantly increased the concentrations of norepinephrine (a hormone/neurotransmitter) in both plasma and cerebrospinal fluid compared with the placebo group. [9]

Yohimbine may present a therapeutic alternative in autonomic dysfunction (dysfunction of nervous system). Earliest studies suggest that the effectiveness of yohimbine in autonomic failure can be improved with some inhibitors. [6]

Sports Enhancement and Weight Loss – Not So Much

The use of yohimbine for bodybuilding, athletic performance, and/or weight loss has been evaluated in several studies, but there is no conclusive evidence of effectiveness in these areas of metabolic development. [10]

Is Yohimbe Ever Bad For You?

There are many controversies on the safety of yohimbine and P. yohimbe, and insufficient studies to give an objective opinion.

A meta-study published by the American Urological Association in 1998 documented the reported adverse effects of the intake of yohimbine. These involved gastrointestinal disorders (the most common), anxiety, increased blood pressure, headache, agitation, rash, racing heartbeat, and frequent urination. Anxiety was usually observed in people with a history of anxiety or depression, and previously normotensive (normal blood pressure) patients usually did not experience increases in blood pressure. Side effects were observed at the same occurrence as among individuals taking a placebo, three percent of each group. [3] [4] [1]

Researchers investigating data from Poison Control Centers found that in California alone, yohimbine supplements were associated to more than 130 hospitalizations between 2000 and 2006. The reported side effects were related with significantly more serious consequences than the average exposures reported to the California Poison Control System.

Because of these risks, many countries have forbidden extracts of yohimbe in supplements and foods. Yohimbine supplements are forbidden in Canada, Australia, Netherlands, and the United Kingdom. [2]

While useful for a number of medical conditions, yohimbine has not been proven to have much effect at all in terms of general population sports enhancement or weight loss. There are many adverse effects of yohimbine supplements and few studies have been done to guarantee its safety. Therefore, as with any supplement, check with your doctor before adding it to your regimen.

Everything You Need To Know About Garcinia Cambogia