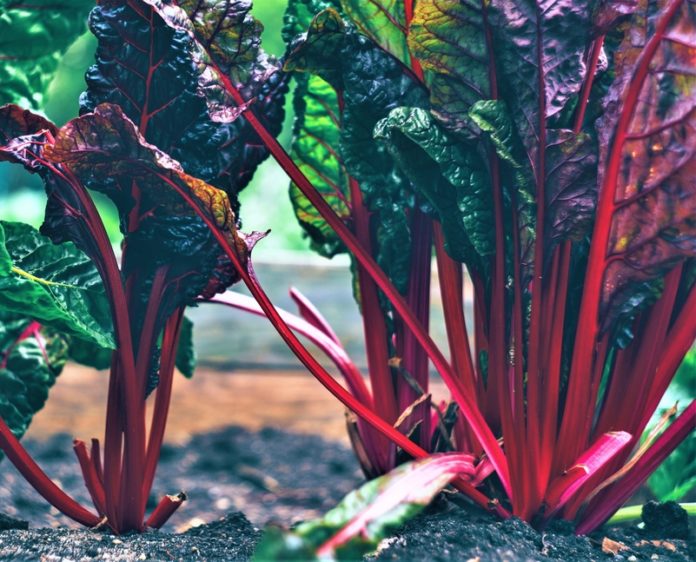 You may or may not be familiar with rhubarb, but it is casually known as the pie plant due to its popularity in strawberry rhubarb pies and other similar desserts. There have been rumors about rhubarb being poisonous, but is this true?  It comes from the family Polygonaceae, and it produces thick and poisonous leaves, which are not edible. The stalk is edible, however, which is confusing to many people. If you are not familiar with what rhubarb tastes like, it has a rather tart and sour taste to it and often time’s people add sugar to offset its bitterness. The rhubarb plant itself looks very similar to celery, but it has a reddish pink color to the stalk instead of green. This unique perennial vegetable is not the most popular to consume, but there are many different recipes to enjoy that have rhubarb in them.

First and foremost, where did the name Rhubarb actually come from? Many experts believe it came from the Latin word, Rheubarbarum, and the name Rha was tightly associated with the name too. The Scythians who lived over 3,000 years ago were called Rha and they lived on the Volga River, which is where rhubarb grows fervently today due to the damp climate. This is just history on the name, not the overall origin of rhubarb, which I will touch on below. [3]

The earliest records of rhubarb date back to 2700 BC, and it was a very prevalent plant in ancient China. Originally, it was used solely for medicinal purposes and not for eating, which is common to ancient China. In the year 557 BC, rhubarb was given to the Wu emperor of the Liang dynasty to cure his fever, but he was cautioned to use this plant with caution as it was said to be very potent. Later on down the line throughout the dynasties it was used in the Song and Yuan dynasty during times of plague, illness, and war. This lasted until year 1368 when sadly during the Ming dynasty one of the emperors tried to commit suicide by overdosing on rhubarb medicine.

Later on down the line, rhubarb was still being used as medicine, and it is quoted:

“The imperial commissioner, Lin Zexu, who was sent to Canton in 1839 to put an end to the opium trade, wrote a letter to Queen Victoria pointing to the “fact that the foreign barbarians surely would die if they could not obtain tea and rhubarb from China and that the Queen for this reason should stop the wicked British merchants from trading with opium. Victoria seems never to have had the letter translated and read for her and when Lin Zexu later the same year wrote to the British merchants in Canton telling them that a stop to the rhubarb trade would mean the death for the pitiful foreigners, the pitiful foreigners responded with canon boats.” [4]

It wasn’t until 1778 that rhubarb was registered as a plant in Europe thanks to Marco Polo. In Europe, the first uses for rhubarb plants happened to be in pies and tarts. To this day, it is still used as such and enjoyed all around the world. It appeared in America around 1790, when an unnamed Maine gardener brought over seeds to Massachusetts from Europe, where it was then cultivated widely and sold in the produce markets. According to history, “Rhubarb enjoyed widespread popularity for about 100 years. But the expansion of trade that followed the World Wars introduced more competition, and eventually rhubarb fell out of favor, acquiring a reputation for being stodgy and old-fashioned.” [5]

Today, it is not the most popular vegetable to grow and consume, but it mainly functions well with desserts. Its tart taste makes it hard to enjoy without added sugar of some sort, which means it is not in high demand for many folks unless they are planning on baking a pie with it. It still can be used medicinally, but that might be only relevant in certain areas of China. The history of how it circulated throughout the world with its different uses is definitely not one to overlook.

This fleshy vegetable has a plethora of vitamins and minerals, which makes it a great option when looking to eat healthier. Even though it has a bitter taste, it still can be enjoyed outside of a dessert to get the most nutrients possible. Traditionally, this veggie is low in calories with 1 cup only containing 26 calories. Due to its low caloric number, it can be used as a weight loss food if you can get past the tart taste. It is made up of 95% water, so it can be hydrating if you consume it in its natural state. The acid that the rhubarb gives off can be offset by adding sugar to the plant, which is why it makes it good to use for desserts. Rhubarb is full of calcium, potassium, vitamin A, C, D, E, K, and fiber. [6] This easy to grow plant can last up to 10-15 years once established, so there is no problem with shortages of rhubarb in the garden!

With only half of the plant being good to consume, you would think this veggie would lack vitamins and minerals due to its tart taste. The red stalks pack a higher nutritional punch than the greener stalk, as it is high in flavonoid compounds. Other vitamins present in rhubarbs genetic makeup are niacin, pantothenic acid, riboflavin, thiamin, copper, iron, magnesium, and phosphorus. For such a tart little veggie, there is a lot of bang in the nutritional category! [7]

There are many different health benefits that are associated with rhubarb, especially after the list of nutritional facts listed above. According to Nutrition and You, “Red color stems carry more vitamin A than the green varieties. Further, the stalks also contain small amounts of polyphenol flavonoid compounds, like ß-carotene, zeaxanthin, and lutein.” [7] Rhubarb has a significant impact on the health of the neurons in the brain and has been said to have a positive impact on Alzheimer patients as well as help prevent the disease from setting in in the first place. It also has a greater impact on weight loss because rhubarb is an extremely low calorie vegetable.

Other health benefits that notably stand out are cardiovascular benefits because it is low in cholesterol and fat. It is also loaded with antioxidants that make sure the free radicals are not attacking the body in harmful ways. [8] Due to the high fiber content, rhubarb also has positive impacts on digestive health and making sure regular bowel movements are happening. Lastly, bone health is another benefit of rhubarb due to the high vitamin K content. With high vitamin K content, blood health is also promoted, so it has multiple health benefits to take note of.

There are a variety of popular types of rhubarb available for both purchase and to grow in your garden. While there are not an infinite list of styles to choose from, there still is a good list to go by. The first is Holstein Bloodred, and it produces bright red, juicy stalks. McDonald’s Canadian Red is another form of bright red stalk that is best when it is frozen or canned. Canada Red is also bright red, yet gives off a sweeter taste than most rhubarb stalks. The Colorado Red, another red variety has been said to be the sweetest and is a favorite for jams and jellies. A few of the green varieties are the Sutton, which is streaked with red and green. It is both fragrant and tender, all at the same time.

The Turkish is another form of green stalked rhubarb that is very mild in flavor and not sweet by any means. German Wise has a speckled look and is not common to green varieties. It is milder and not as sweet. Last but not least, the Sunrise variety is also sweet and it is great for jams and jellies. [9] All of these varieties are best grown in a temperate climate, and they do not do well in high heat. All of these varieties are very similar in stature and in taste as well. They can all be grown inside and outside as long as the climate does not get too hot. The spring is the best time to harvest and grow rhubarb because it does not like to be in hot heat.

Some of the main uses for rhubarb is in desserts that are prepared with it. There are so many great desserts to choose from, but the most well known is the strawberry rhubarb pie. Whether you harvest rhubarb straight from your garden or buy it at the grocery store, there is no doubt you will be delighted when you incorporate its tart and mildly sweet nature in a piecrust of your choice. This specific recipe comes right from Food Network, and it is by Valerie Enters. Follow it step by step, and you will have yourself a fantastic dessert to share among family and friends.