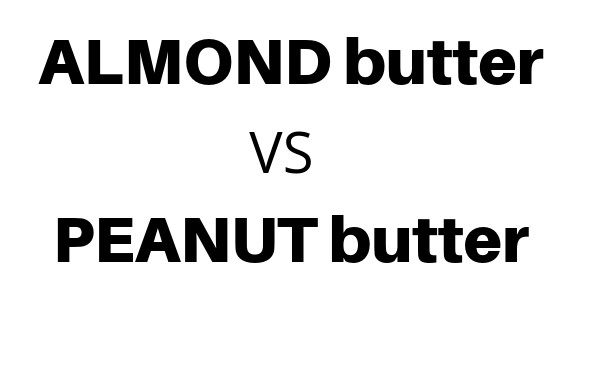 Differences Between Almond and Peanut Butter

Both almond and peanut “butters” are simply finely ground almonds or peanuts. Many brands of both (but more-so in the case of peanut butters) have added sugars and artificial ingredients, which should definitely be avoided. However, in their pure form, these butters are a single-ingredient food.

While on the topic of nuts, the major difference (and the one that is surprising to most people) between almonds and peanuts is that peanuts are actually a legume, which means they are a member of the same plant family as peas and beans. They come from pods that grow underground and are mostly grown in tropical and subtropical climates, particularly in Africa, Asia, Spain and the southern United States.

Almonds, on the other hand, are tree nuts and in the same family as walnuts and cashews. The vast majority of almonds come from California, but they are also grown in Mediterranean countries.

Because of the increased amount of resources needed to grow almonds, they have a higher price tag.

Do They Taste Different?

This is a matter of opinion, but peanut butter has a slightly stickier texture and a saltier taste, while almond butter is a bit creamier and sweeter. They can be used interchangeably in the usual ways such as with sliced apple, on a sandwich, in a smoothie, etc.

Why Has Peanut Butter Been Demonized?

Let’s be clear that peanut butter is also a healthy option (as long as you skip brands like Jiffy that have added sugars). Natural peanut butter is a great source of plant protein that offers many (but not all) of the same health benefits as almond butter.

Peanut butter has gotten a bad rap mainly due to the fact that it is a legume, which a lot of people avoid these days (particularly those following a paleo or primal diet model). Legumes can also be irritating for anyone with a digestive disorder such as IBS (irritable bowel syndrome) or who struggles with an autoimmune disease.

Peanuts also contain more phytic acid than almonds, which is a compound that can reduce the absorption of certain important minerals (1). Phytic acid is also present in other grains and legumes, leading some people to believe that they have no place in a healthy diet.

Peanuts also pose a greater risk of allergy, almost twice that of almonds (, many more peanut butter brands are packed full of added ingredients such as sugars and artificial ingredients, so be sure to shop for brands that include just one ingredient: almonds or peanuts.

Why Almond Butter is the Healthier Choice

Unless you have an allergy, digestive issue or autoimmune condition, peanut butter is not a bad choice for a healthy snack. However, there are some reasons why almond butter is healthier (keep in mind, though, that peanuts share some of these same benefits).

Eating almonds has been linked to a reduced risk of cardiovascular disease (3).

Almonds can improve the balance of good gut bacteria (probiotics) in the digestive tract (4).

Because almonds and other nuts are excellent sources of healthy fat and protein, they are ideal for supporting healthy blood sugar levels. Almonds are also high in magnesium, which many diabetics are deficient in and is key for blood sugar regulation (5).

Almonds are Higher in Minerals

Almonds are higher in manganese, calcium and magnesium (7; 8).

Are There Any Cons to Almond Butter?

If you have almond butter available near you or can make it yourself, opt for almond butter over peanut butter. However, keep in mind that both are healthy sources of good fats, protein and micronutrients, so, either way, you can’t go wrong.

Why You Should Swap White for Sweet Potatoes!