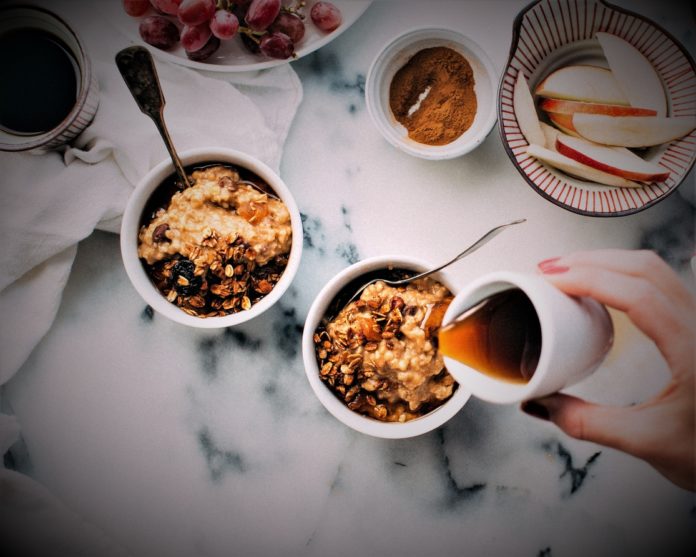 By this point, most of us know that refined sugar (a.k.a. table or white sugar) is bad for our health. An easy nutrition swap that can make a big difference is substituting honey or maple syrup for refined sugar. Whether you use sugar in cooking or your morning coffee, replacing it with a more nutrient-dense option is an important step to take for your health.

Remember, both honey and maple syrup are still forms of sugar, but they come with significantly more micronutrients (vitamins and minerals), as well as some fiber, that make them far superior choices to white sugar.

Why You Should Nix the Refined Sugar

This might be review for some, but let’s take a quick look at a few of the top reasons to omit refined sugar from your diet. This type of sugar offers no health benefits whatsoever, and actually depletes the body’s nutrient stores. White sugar is entirely sucrose, which the body then breaks down into equal parts glucose and fructose.

Other , and it is most definitely connected with weight gain and obesity (in fact, it is likely the number one cause of obesity in the United States).

These are only a few (very convincing) reasons to avoid refined sugar. Now, let’s move on to health benefits of honey and maple syrup, and why using them as an alternative to white sugar is a good idea.

You might be surprised to know that studies have found honey to be especially high in phenols, flavonoids and enzymes that work to protect us from free radical damage, which is

Honey and its Health Benefits

Honey, on the other hand, has been used across cultures for centuries for both its nutritional and medicinal benefits. Honey is high in fructose (so for those who already have insulin resistance or diabetes, this could be cause for concern), but it is less damaging than refined sugar. Honey also contains a myriad of micronutrients and antioxidants.

You might be surprised to know that studies have found honey to be especially high in phenols, flavonoids and enzymes that work to protect us from free radical damage, which is

Honey is also a it contains potent anti-bacterial and anti-microbial benefits, and you can use it to treat infections (though it is most effective in treating partial thickness burns). Medical grade honey is frequently used by naturopaths and other practitioners to treat diabetic ulcers and skin conditions such as eczema.

Last but not least, you can use honey (preferably raw or manuka honey) as a replacement for conventional cough medicines for children, without the potential side effects. One study found that honey was even more effective in curing a cough than two leading drugs. However, do not administer honey to children under the age of one.

Grade B maple syrup does contain a high level of free-radical fighting antioxidants, which puts its benefits high above refined sugar’s.

Maple Syrup and its Health Benefits

Maple syrup is made from the sugary sap of maple trees, and has been used widely across North America, starting with the Native Americans. The majority of maple syrup worldwide is now produced in Canada, and it can be purchased as grade A or B syrup, B contains more minerals and has a stronger flavor, and grade A contains slightly fewer nutrients and has a milder flavor. Grade B is preferable, whenever possible.

Maple syrup offers zinc, iron, potassium, manganese and calcium, and is two-thirds sucrose. In other words, if you replace refined sugar with maple syrup and keep the quantity the same, you will be cutting your sucrose consumption by one-third. When using maple syrup as a replacement, try using less (start with even less than half the amount of sugar) than your recipe calls for.

Grade B maple syrup does contain a high level of free-radical fighting antioxidants, which puts its benefits high above refined sugars.

Neither honey nor maple syrup are foods that should be eaten in excess due to their ability to cause insulin spikes, but using them in moderation instead of refined sugar is a definite nutrition win.

Whenever possible, choose raw honey and grade B maple syrup instead of more-refined versions and always start with a small amount and increase as needed for desired sweetness. Both maple syrup and honey are actually a bit sweeter than refined sugar, so start with no more than half the amount of sugar that a recipe calls for.