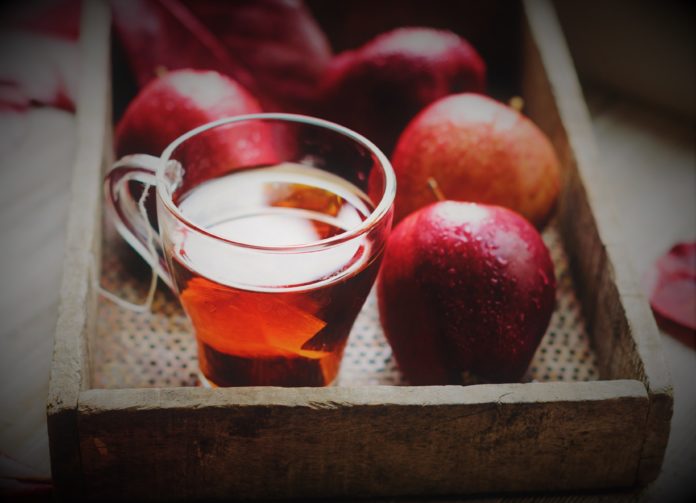 Well we could assume that they use high-end facial products and have personal trainers, but it is actually much less expensive and simpler than that. Apple Cider Vinegar is their secret. Well, not such a hidden fact anymore. Over the past few years several celebrities have disclosed in interviews that they swear by incorporating Apple Cider Vinegar into their daily routines. They do this in several ways whether it be making a tonic before meals in the morning, adding a teaspoon or two to their salad dressing, or even by using it topically.

We are familiar with the hype of green drinks, cleanses, and fermented drinks such as Kombucha, but Apple Cider Vinegar seems to be the most practical. It serves as a natural agent that is actually a common household item with numerous benefits both internally, externally for your body, and even your living space. As with anything, there are going to be scientifically proven claims, false claims, and everything in between, but after careful review of testimonials and reading up on studies that have been done all over the world, this seems like a reliable product. The best part is, there are no harmful side effects when used in proper moderation so you really should have no concerns. That being said, we have put together a list of about eight benefits and uses that you may leave you with no choice other than to give it a try!

Apple Cider Vinegar is great for people that suffer from Type 2 diabetes. It is actually said to work in the same way as many medications. Diabetics participated in a study in which they were very impressed with their results. By consuming two tablespoons of Apple Cider Vinegar before bed, their glucose levels had dropped significantly by the morning time. Whether you have diabetes or not, the anti glycemic factor of the acid is helpful to stabilizing blood sugar levels and overall health.

The power of probiotics is well-known and is very prevalent in yogurt and fermented products. Many times you will reach for a cup of yogurt as a nice source of probiotics over sauerkraut, but why not just down a tablespoon or two of Apple Cider Vinegar to get the job done. This vinegar not only aids in digestion but it also helps out the liver and the spleen.

Going hand in hand with the above benefit of supporting digestion. If you consume Apple Cider Vinegar about 30 minutes prior to consuming a meal you will be much less likely to indulge in other harmful cravings that usually spike up throughout the day. According to Heidi Klum, her cravings can be curbed with a simple whiff of the substance.

Well with the understanding that this natural substance can support digestion and curb cravings, it is bound to have some effect on weight loss. There have been studies done to prove that those that consumed 1 to 2 tablespoons each morning lost more weight than those that did not partake in this routine. The participants in the study all had a relatively similar diet and exercise schedule, leading the observers to believe that the Apple cider vinegar did indeed play a role in getting rid of unwanted pounds. The acetic acid that the Apple cider vinegar contains can actually block some of the carbohydrates that you consume by interfering with the enzymes while in the stomach, in turn hindering your body’s ability to absorb these carbs. This does not mean that you can have a major carb-load and come up with an equation to cancel it out with vinegar, but in small amounts this cancellation process can most definitely take place.

Keeping up with a several step skin care regimen can often be a pain; using an Apple Cider Vinegar toner might the all you need (along with a nice moisturizer of course). I don’t know about you, but making sure that my skin is replenished daily, weighs in pretty high on my list of priorities. After reading testimonials made by Scarlett Johansson I am convinced. Not only is this a natural and chemical free alternative to other toners, but it gives your skin a nice breather and break from most intense dermatologist recommended products. Keep in mind that this does not to be used every night and definitely not if you will be spending the night out because it does have a little vinegar stink to it.

This may not be one of your main concerns, but it is always nice to know of a simple go to remedy when you suffer from hiccups. Some people actually suffer from them pretty severely. The sour taste of the vinegar actually stimulates the nerves which stops the spasms in turn immediately getting rid of your hiccups.

There are numerous natural remedies to help cure a sore throat and stuffy nose out there, but have you ever tried vinegar? We all know that vinegar is not a subtle substance by any means, it fact it is very potent. The acidic factor makes it nearly impossible for germs to survive. The minute you starts to feel groggy, a tickle in your throat, or a sniffle be sure and have a couple spoonful’s of Apple Cider Vinegar, after all it can’t do any harm! Simply gargling a bit mixed with some warm water can get the job done.

Just as vinegar’s role in killing of germs in your body when you have a sickness coming on, it can rid your kitchen and household of germs as well. It not only kills germs but can inhibit bacteria from growing as well.

Overall it seems like Apple Cider Vinegar brings a lot to the table. From health benefits, to skin care, to household cleanliness you are set! Now all it takes is getting over the smell and making it a part of your daily routine. For general health purposes mixing one to two tablespoons in a cup of warm water every morning or adding it to your salad dressing are great ways of making it a normal ingredient daily.

Everything You Need To Know About Guarana